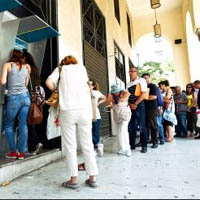 Line up in Greece to get some cash

You only need to look at recent events in EU member states to understand just how ruthless, greedy and demanding governments can be. Because even in first-world countries, people have found themselves the victims of corruption and manipulation, and they have lost a lot of money because of it.

When the Greek economy collapsed, many people lost their jobs, their homes and their livelihoods, and to top it all off, they were told that they couldn’t withdraw any money. As soon as the crises came to light, the banks were shut, as the government knew the people would withdraw all of their money if they did not, and if they allowed people to withdraw all their money, then the country would suffer even more. When the banks eventually did open, people are told they could only withdraw a limited amount of cash everyday — just enough to live off.

You have to consider that this was their money, their life savings, their pensions and their investments, but because the government controlled the banks, they were controlling the money. The same happened in Cyprus, and in many cases it was even worse.

You might assume that you’re safe in your country, that it’s too big or too rich to do something like that. But you would be wrong. Not only can we be sure that Greeks and Cypriots thought the same thing, but similar things have also happened in many other, richer countries. For instance, people in the United Kingdom experienced similar difficulties when the Northern Rock bank collapsed and when the Royal Bank of Scotland experienced problems. These issues were not as severe as what happened in Greece and Cyprus, but they were certainly a stark warning.

Our Advice: Stay Out of the Banking System

Of course, it’s not easy to store your cash outside of the central banking system, and it’s not really advisable either, as there may be some tax issues (although this doesn’t stop the super-rich). However, you can store your gold out of reach of the government, and you don’t need to trek halfway across the world to do it.

Many bullion investors are turning to companies like GoldBroker, mentioned at the outset of this article. They were fairly small and unheard of just a few years ago, but after offering something that few others were offering, and providing a service that many customers wanted, they quickly grew into one of the biggest dealers in the world.

GoldBroker own large amounts of gold, silver and platinum. But instead of storing this in a warehouse and then shipping it to you when you order, it is stored in secure vaults outside of the banking system, in NYC and Toronto, but also in secured countries like Singapore and Switzerland. When you order and choose their storage option (you can also have the gold delivered to your home if you choose) they will simply allocate the amount you ordered, keeping it in their vault and sending you a certificate. Unlike other storage companies, this certificate will be in your name, which means the gold is all yours.

These vaults are some of the most secure in the world, and they are not within the jurisdiction of the government, so even if they wanted to take it from you or control how you used it, they couldn’t. What’s more, if you ever want to get your hands on this gold, then you can simply request delivery of it.

If you’re investing a large sum of money in precious metals, you really need to ensure that they are stored out of reach of your government, which is why services like GoldBroker are so vital. However, they are not perfect for everyone. GoldBroker don’t deal in orders of less than a few thousand dollars, and they don’t stock rare coins or bars. They are aimed at large-scale investors only, people looking to safeguard their fortune or to make a profit from this metal, and they will be of no interest to small-time investors or collectors.